ByThink You Have Sleep Apnea? Take the Elbow Poke Test By… 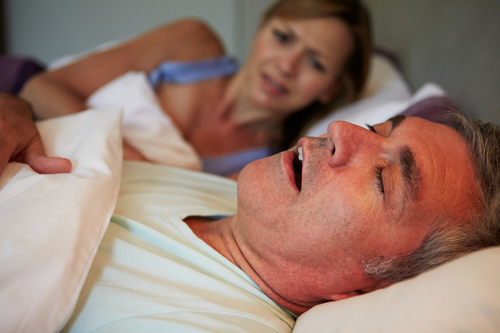 ByThink You Have Sleep Apnea? Take the Elbow Poke Test

Does your bed partner ever poke you in the ribs to get you to stop snoring or start breathing again if you’ve stopped? If you answer yes and are over 50, there’s a pretty good chance you have sleep apnea, a condition in which the airway becomes blocked repeatedly during sleep, causing you to wake up continually and have fitful slumber, putting you at risk for a number of health problems including early cardiovascular issues such as heart attack and stroke.

In a study published in the Journal CHEST, people about to have a laboratory sleep study were asked whether their bed partner ever poked them with their elbow because they were 1. Snoring or 2. Had stopped breathing.

In men older than 50 with a body mass index more than 31 who answered yes, there was a 96.6 percent predictability of having a sleep apnea diagnosis.

Seems there may be a pretty good chance that if your bedmate is jabbing you in the ribs, you, too, could have sleep apnea.

Dr. Murray Grossan, a Los Angeles-based ear, nose and throat physician, said partners can recognize signs of sleep apnea and save their significant other’s life by knowing if their bedmate snores and/or stops breathing while asleep.

Those seemingly annoying sleep traits may be a signal of something serious.

If you don’t have a bed partner to take the elbow poke test, Grossan said you can ask yourself a few questions to gauge your sleep apnea risk:

– Do you have a recent onset of fatigue or yawning?

– Do you suddenly snack more?

– Have you fallen asleep during the day, at your desk or in a meeting?

– Have you recently developed acid reflux and/ or high blood pressure?

– Are you more of a couch potato than you were previously?

Answering yes to these questions may also be a predictor of sleep apnea. If you’re concerned you could be at risk, talk to your doctor.