OSA and Insulin Resistance: A Link? It’s common for people… 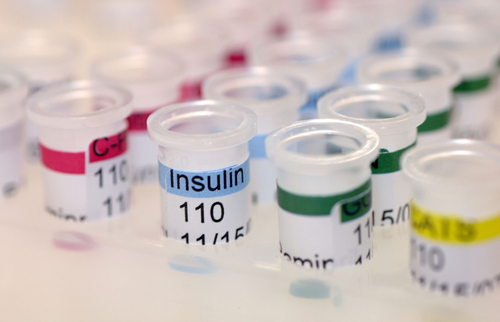 OSA and Insulin Resistance: A Link?

OSA obstructs the airway, making it difficult for a person to breathe properly during sleep and causing them to wake up frequently (even if they don’t remember), which leads to the fatigue. And several studies also show OSA triggers changes in the body’s use of insulin, a hormone made in the pancreas that plays a major role in metabolism, which leads to a person developing insulin resistance—a precursor to diabetes.

The risk isn’t limited to adults: Sleep apnea has been linked to an increased risk of insulin resistance in children, according to a study conducted at Massachusetts General Hospital in Boston.

According to the U.S. Department of Health and Human Services, a person with insulin resistance produces insulin but does not use it effectively. Insulin resistance causes a buildup of glucose in the blood by not being absorbed by cells. This leads to a person developing prediabetes or type 2 diabetes.

The good news is most people can often prevent or delay diabetes that results from insulin resistance by making changes to their lifestyle. In addition to diet and exercise to control weight and sugar intake, one of the most significant changes is treating OSA.

That’s because sleep apnea is thought to cause metabolic changes that increase insulin resistance, research showed. The intermittent deprivation of oxygen caused by obstructed airways associated with sleep apnea causes a distinct drop in insulin sensitivity.

The first step in getting a handle on sleep apnea is assessing your risk for the sleep disorder. This online quiz can help you determine if you, or a loved one, are at risk. Talk to your doctor about your symptoms, which can include fatigue, waking with a dry mouth, snoring or stopping breathing while sleeping or waking up several times a night.

If you are diagnosed with sleep apnea, you may be prescribed continuous positive airway pressure therapy, which opens airways and effectively treats sleep apnea and can lower your risk of insulin resistance.