The Pain of Sleep Problems By Gina Roberts-Grey Tossing and… 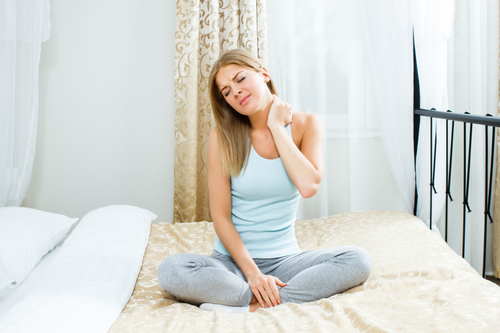 The Pain of Sleep Problems

Tossing and turning all night is a real pain in the neck — literally.

The pain of an aching back, shoulder or neck can make it hard to sleep at night. But sleep disorders such as sleep apnea or insomnia also can trigger bouts of muscle pain that make sleeping difficult.

British researchers looked into the connection between sleepless nights and widespread pain and found that non-restorative sleep tops other causes of pain, including anxiety, poor physical health and overexertion. In fact, the study noted restless sleep is “the strongest independent predictor of widespread pain onset among adults over the age of 50.”

Experts speculate the lack of restorative sleep may prohibit muscles from having a chance to re-energize and perform the natural healing processes that occurs during sleep. And that can trigger pain throughout the body.

As many as 80 percent of Americans experience some form of daily ache or pain. However, widespread pain is defined as affecting multiple areas of the body. It’s one of the most common symptoms of fibromyalgia, which affects 15 percent of women and 10 percent of men over age 50, according to previous studies.

“If you have widespread pain or achiness that has been going on for at least three months associated with fatigue and/or insomnia, you likely have fibromyalgia, even if the pain is associated with another illness like arthritis, lupus, etc.,” saidDr. Jacob Teitelbaum, author of, “From Fatigued to Fantastic!”

Preventing, or treating, any widespread pain can improve sleep significantly and even treat insomnia, according to studies. Teitelbaum recommends these strategies to combat pain and cut the chances widespread pain will keep you up at night:

Take your vitamins: Vitamin D isn’t just for your bones. Researchers at Musgrave Park Hospital in Belfast, Ireland, reported a strong correlation between low vitamin D levels and higher rates and longer duration of generalized bone and/or muscle aches and pains, including fibromyalgia. Men and women ages 19 to 70 should aim for 600 IU daily of vitamin D.

Manage stress: Teitelbaum said stress can be a trigger for widespread pain. “Stress typically exacerbates any pain condition because it causes you to tense up your muscles — even if you don’t realize it,” he said.

Get some exercise: It sounds counter-intuitive to move when you’re sore, but Teitelbaum’s research shows exercise can help decrease widespread pain by as much as 50 percent.